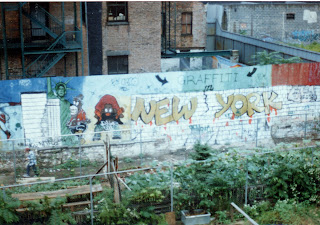 I can talk from experience about community gardening in the 1980's. I started community gardening at the 6BC community garden in the early 1980's. At the time the garden was a dysfunctional mix of neighbors on the block including Puerto Rican and African American families, twenty something whites who recently moved into the neighborhood and a teacher and her elementary school students from the public school on the block. The garden was divided by chain link fences. One older man gardened by himself in a fenced off section where he grew a lot of tomatoes, peppers and cucumbers. A Puerto Rican extended family gardened in several raised beds, including one that was mostly taken up with a large rose bush. Someone tended a pot of annuals in from of a shrine to the Virgin Mary where often a votive candle was kept burning. I started gardening on half of a raised bed by growing a couple of tomato plants and a few herbs.

A handicap accessible raised bed was little used; there were no disabled gardeners. Most of the raised beds were made of rotting or patched together lumber. Some of the pathways were lined with brick others were just hardpan. The compost area was an unkempt pile of weeds, twigs and branches. The garden had a few trees and shrubs that were haphazardly planted. The group was not well organized and the gardeners were distrustful and antagonistic toward each other. Vandalism and theft were rampant. Just as a tomato ripened it disappeared.

The neighborhood was in the midst of a heroin epidemic. The way that the garden was fenced, a narrow alleyway ran the length of the building adjacent to the south side of the garden that continued through to the adjacent street. This alleyway was a convenient drug distribution point as the dealers could escape in either direction if the police arrived. If you were in the garden at the right times, usually late morning and at dinner time, you would notice a number of disheveled looking men and women nervously pacing near the garden looking suspiciously up and down the block. All of a sudden the dealer would arrive, everyone would form a neat line and in no more than 5 minutes the drug exchange would be finished. During off hours for the drug trade the alleyway was used for urinating and prostitution.

This lawlessness found it's was into community gardens throughout the city. Theft and vandalism were major problems for many gardens. Sheds could not be made vandal proof, so tools could not be safely stored. Annuals, perennials and shrubs with showy flowers could not be planted. Mother's Day was dreaded; it was the day of the year with the highest incidence of robbery. More than a few moms received presents of flowers or plants that were nurtured in a community garden. In fact the Green Guerillas distributed a fact sheet on how to prevent vandalism that showed gardeners a method for chaining and locking shrubs to deter theft!

Not a very auspicious beginning for a movement or a career but small or humble or difficult beginnings very often yield amazing results with perseverance and luck. More chapters to come. 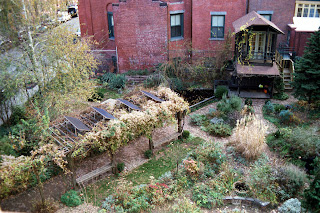 6BC Community Garden circa 2002
Posted by Lenny Librizzi at 8:01 PM