The next part of the story begins the physical changes to the garden. The 6BC group was not well organized, meetings did not happen and no one bothered to renew the lease with Operation GreenThumb. I was determined to do something. I had recently started working at council on the Environment and I was learning about the world of community gardening in New York City. t that time there was no long term protection for community gardens. Some discussions were taking place and there some gardens were being offered long term - 5 year - leases.  The housing market was opening up and the Lower East Side was prime territory for development. The local community board was working on a cross subsidy plan as a way of insuring that there would be some low income development alongside the market rate housing. The plan was that for every market rate apartment built, developers were to subsidize a low income apartment. The plan saw few if any low income apartments built as result of the cross subsidies. The 6BC lot together with the lot on 5th Street made it a large assemblage and attractive for developers. 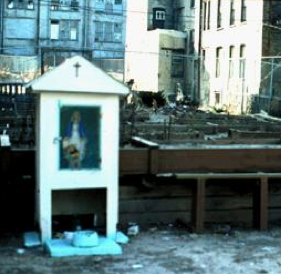 Something had to be done to preserve this garden space so I took it upon myself to sign the lease for the garden. The added benefit was that the garden would be eligible for materials like lumber, concrete and tools that could be used to rebuild the raised beds. I drew up plans for an arbor in 1989 and began showing them around to the gardeners. I got positive feedback to the plans and a few folks expressed an interest in helping to build the structure and rebuild the raised beds. At the time, I was driving the Grow Truck for Council on the Environment and I was able to arrange to pick up and deliver the materials for the structure.

A small group worked with me over the course of several weekends to dig holes, pour concrete, set the posts and build the structure with a built in bench.With all of the building going on the garden looked more like a a construction zone. The structure looked great when it was completed, it looked like the first house to be built in a new development before all of the other houses were built, the trees planted and the families moved in. The structure was installed at approximately a 45 degree angle to the street. 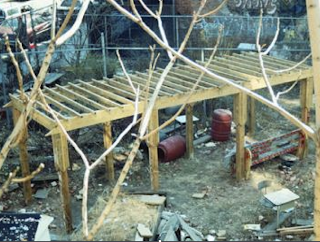 After the success of the arbor project, I worked on an overall plan for the garden that I completed in 1990. The plans called for placement of raised beds in the garden following the same diagonal as the arbor. This shift in the layout served several purposes. It provided visual interest - something different from the rectangular monotony of the streetscape. Manhattan's street grid was laid out following the general shape of the island which sits on a Southwest / Northeast plane. The diagonals in the garden were closer to a true North - South line.  The placement of the structure at this diagonal near the front created a passage into the rest of the garden and gave the visitor or gardener a heightened sense that they had left the street and the rest of the city behind. The diagonal layout left triangular areas in the 4 corners that could and would be used as  seating areas and a large entry area. Part of my thinking at the time was that when different groups of gardeners or visitors were in the garden at the same time, if one area was being used, a second group could use an area in the opposite corner. 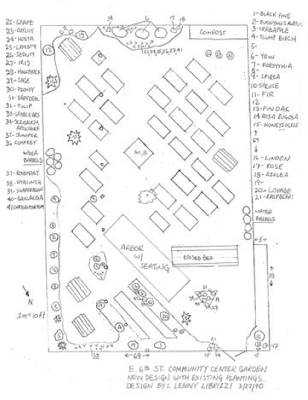 There were a few trees and shrubs in the garden that remained and we built around them. There was still the problem of the extra fences dividing the garden and creating the drug alleyway. There was a small, not very well built shed that needed work. All of these existing elements of the garden needed to be addressed and a new group that would spend a good deal of time in the garden over the next few years helped with that process..... that story in the next post.
Posted by Lenny Librizzi at 8:52 PM