Having a plan for the garden is wonderful but without gardeners to make it happen... well it is just a sketch. The plan called for a bit of heavy labor to remove the old raised  beds and build new ones. At the time there were not very many outside groups offering to help with a labor force. The only one I can remember was C.A.S.E.S. and alternative to incarceration program for those convicted of misdemeanors. Today there are many corporate groups, citywide volunteer organizations like New York Cares and job and skill training groups like N.E.W. and the Green Apple Corps looking for volunteer opportunities.

There was a guy I knew, Mike Gorman, who was a teacher at an alternative high school called Manhattan School for Career Development (MSCD) which was about 4 blocks from the school. The students needed field training leading to non-college career opportunities. The garden provided some opportunities and Mike was very interested in having his students spend time in the garden to learn construction skills, horticulture and garden maintenance, i.e. pulling weeds, pruning and cleanup. So this group spent a lot of hours in the garden to make the sketch become reality.

Fences were removed and most important the fence that created the alleyway alongside the garden was moved to cut off the drug highway/ alleyway and in the process add an extra 500 square feet to the east side of the garden. Other gardens took the fencing and poles and hardware to use at their gardens. The raised planter in the front of the garden was initially repaired and eventually removed as it was never used for it's intended purpose for senior or disabled gardeners. 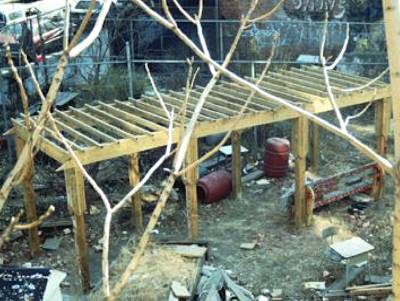 New Structure shortly after it was built.
Note the series of chain link fences. Drug Alley in rear of photo

The neighborhood was still awash in drugs and there was a sizable homeless population although the Dinkinsville and other encampments were gone. The 6BC garden (which was called Sixth Street Community Center Garden at the time) had our own homeless person named Junior who moved into the ramshackle shed that held our garden tools. The MSCD crew rebuilt the shed around Junior and we tried to keep his possessions separate from the garden stuff. He would help sweep and carry supplies as they arrived especially if someone gave him a couple of dollars to buy something alcoholic to drink. A number of folks in and outside of the garden tried to work with Junior to find him shelter and services but he preferred to be in the garden and lived there until he died a few years later.

There were many things happening in the community gardening world at this time that would impact the 6BC Garden. A group of organizations that provided assistance to the community gardens were meeting as an ad hoc group called the Lower East Side Technical Assistance Group, spearheaded by the Green Guerillas. We worked with architect Michael Kwartler who had just developed the Environmental Simulation Center. This was the beginnings of the use of computer modeling for Urban Planning and to use computers to do sun/shade modeling.  He was able to develop plans and drawings that showed how the Lower East Side could have housing built on truly vacant land and the community gardens could continue to exist and thrive. 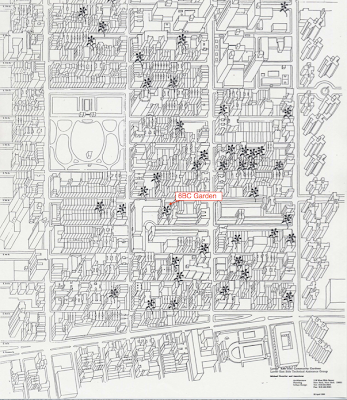 Kwartler Map. Gardens are shown as flowers. 6BC labelled.

There were constant contentious meetings of the local community board that were often disrupted by demonstrators opposed to the types of development that were proposed. Gardens were given 5, then 10 year leases as a step toward permanency. A few gardens were transfered to the Parks Dept from the Departments of General Services and Housing Preservation and Development. Some members of the 6BC garden began to put together documents and photos depicting the positive impact that the garden had on the community in preparation for the coming battles to preserve not only this garden but all of the community gardens in NYC. That's the next chapter.
Posted by Lenny Librizzi at 9:04 PM